Buy Swedish snus Ettan white portion (white pouches) you'll get a dark and smoky tobacco taste with distinct notes of smoke and malt, along with hints of dark chocolate. White-pouch, dry on the surface for less drip. The pouch contains a moist snus which provides a prolonged flavor release. The pouches are arranged in a formation that Swedish Match calls Star Formation®. 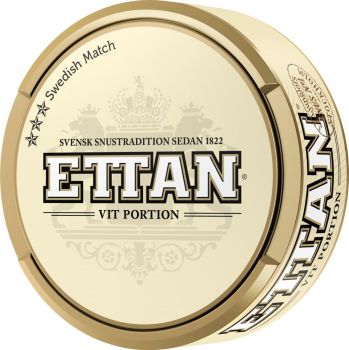 Ettan’s original recipe, with a rich blend of tobacco, salt and water, is a well-preserved secret from 1822. It was first developed and refined by Jacob Fredrik Ljunglöf, then improved and packaged for the mass market by his son Knut Ljunglöf, while always maintaining the highest possible quality standards.

Knut Ljunglöf had a gift. He could tell the quality and moisture content of snus just by sniffing it. Every morning a silver tray with fresh snus from production was placed on his desk. He would then take a sample of the freshly made snus to his nose and sniff. If he nodded approvingly, the snus could be packaged and sold. If he was not satisfied, the entire batch was thrown away. Throughout the world, Knut Ljunglöf was known as the ‘King of Snus.’ Buy Swedish snus Ettan white portion (white pouches)

Information about the product - Ettan White Portion
Ettan White Portion is a white-portion snus from Ettan Ettan who is one of Sweden's oldest snus brands, has virtually not changed in the recipe since 1822. The traditional tobacco flavor is slightly milder allowing the smoky aromas shines through. You'd also hints of dried grass, tar and malt. Small hint of dark chocolate can also come forward. The portions are filled with flavor, but dry on the surface of its white-version and offers a long flavor release. Previously manufactured One snuff snuff manufacturer Ljunglöf, but in recent years, Swedish Match has taken over the production.

Do not miss this classic in white serving!

"Jacob Ljunglöf created One. He improved snuff quality through a proprietary manufacturing process and began producing better snuff than its competitors. He also managed to make the grade designation No: 1 to her, it popularly came to be called just One. Product One bag has tasted exactly the same way since 1822. One original portion was launched in 1990 and in 2006 launched One white portion. "- Swedish Match