Buy Swedish snus General extra strong portion which is one of the strongest portion snus in the General family. With the classic General flavor and a full-bodied tobacco character. Launched in Norway in fall 2008 and in Sweden in the summer of 2009. An original Swedish snus pouch that contains a moist snus which provides a prolonged flavor release. 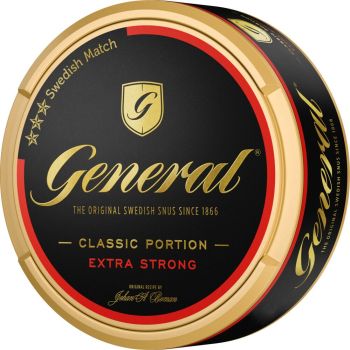 Information about the product - General Extra Strong Portion
General Extra Strong Portion has with its General family has become a real classic in the world of snuff. This is the extra strong version, 15mg / serving. With its rich and spicy flavor of tobacco, where you will also find hints of citrus-like spice bergamot and tea, dried grass and leather. The combination of spiciness and sourness makes snuff balanced.

Reviews 3
Write Your Own Review
Customers who bought this product also bought: