The General brand has become a real classic in the snus world. Here we have the 3rd Generation General snus from the brand, namely General G.3 Extra Strong Slim! With its optimized fit and high nicotine content, these portions will last a long time for the regular snuser. Basically, Johan A Boman's classic recipe provides the taste with its familiar peppers and citrus flavors. 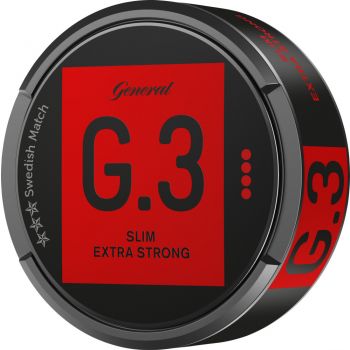 G.3 stands for Generation 3 by General, referring to General snus of the third generation. The first being the original loose snus from 1866 by Johan A Boman, the second the portion snus introduced in the 1970’s and now the introduction of G.3 with two products: Extra Strong Slim White Portion and Extra Strong Slim Portion.

Information about the product - G.3 by General - Slim Extra Strong Portion
The General brand has become a real classic in the world of snuff. Here we have the third generation General snus brand, namely General G.3 Extra Strong! With its optimized fit and high nicotine content, these portions last long and hard for the average person snus users.

The foundation is Johan A Boman classic recipes that provide the taste with its familiar peppery with hints of citrus.