Buy the classic Swedish snus General loose snus from 1866. A recipe with a blend of 22 tobaccos topped with a drop of bergamot oil. Full-bodied, spicy tobacco taste with pronounced notes of citrus from bergamot and hints of hay, green grass and stable. A loose snus that is easy to hand mold into a pillow shape to fit under the lip. This provides a fast flavor release with full bodied character. 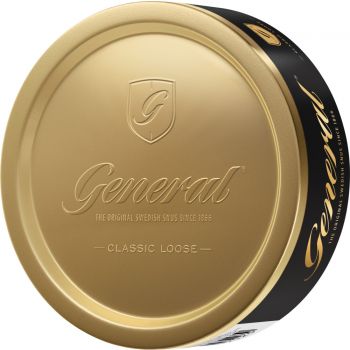 General LOOSE
General loose snus with recipes from in 1866.

Spicy tobacco character with hints of bergamot, as well as slightly tea, hay and leather.

Loose made of ground tobacco. Formed into a pouch of any size for a fast and powerful flavor release.