General Mackmyra Original Portion is a new portion snatch from Swedish Match's Master Blenders Lars Jonsson and Mattias Schyberg. This time, in collaboration with Angela D'Orazio from Mackmyra Whiskey, they have developed a new snus that combines the two flavor traditions of General and Mackmyra Svensk Ek. The snus has a tobacco-flavored taste, inspired by both Generals and Mackmyra's taste palette. Low-key tones of fruit in combination with cedar and oak provide a tradition-based taste that surprises. 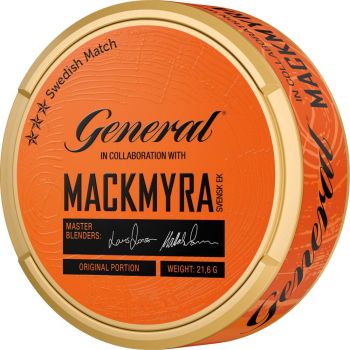 General Mackmyra isn’t the first whisky-flavoured snus, but it marks the first time Swedish Match collaborates with an established whisky brand. The recipe for the original snus has remained the same since 1866. Mackmyra has made Swedish whisky since 1999. The combination of the two flavours results in a snus with a pronounced tobacco taste and distinct notes of whisky.