General Onyx Silver have the absolute highest quality among the General snus. From the design of the can to the prick's appearance and feel, they have listened to their customers. General Onyx is probably the most remarkable portion snus in the Generals catalog. General Onyx is classified as a White Portion (Will be in a black bag) General is one of the world's largest snus brands and is sold in huge quantities in Sweden and throughout Europe. Many snusers think General is the snus that works in all modes. General, like many other brands from Swedish Match, dates from the 19th century. 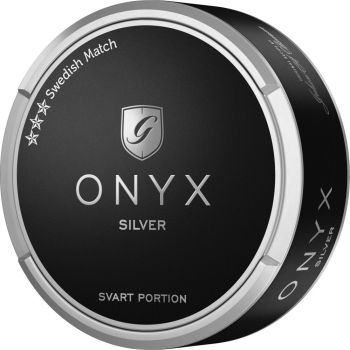 Throughout its 150-year history, General has always been a leader in snus development. By 1985 a revolutionary invention, the Swedish portion pouch, was introduced.. Next, in 2003, General White Portion was launched as a snus that doesn’t drip in the same way as original portion snus. General Onyx was introduced in 2005 as a new alternative in the General family with its graphite black portions, presented in a formation that Swedish Match calls Star Formation®. Today, just as it was 150 years ago, General guarantees well controlled quality – a snus that keeps the tradition of Johan A. Boman’s work.

Reviews 4
Write Your Own Review
Customers who bought this product also bought: