Göteborgs Rapé Loose has become a real classic with it's distinctive taste. To Göteborgs Rapé, tobacco varieties are used throughout the world and the loose snus has a medium-filling tobacco character with clear elements of juniper, lavender, citrus and cedar wood. It's an easy-to-use loose snus that adds to the lip and offers a long-lasting taste experience. Göteborgs Rapé is one of the largest and most well-known brands in the Swedish snus market. The word rapé" comes from French and means "scratch", which was considered to be an exclusive snus quality in the 18th century. Göteborgs Rapé was the first snus that came in white portion in the early 1990s." 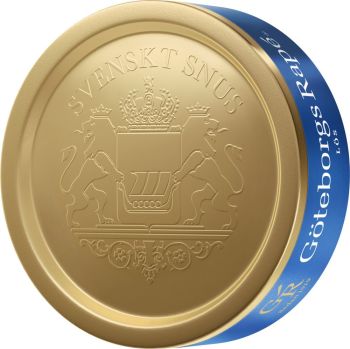 Göteborg’s Rapé was the first white portion, an innovation that was quickly adopted by several other brands. The special character of Göteborg’s Rapé also sets it apart: the tobacco flavors are mild, slightly sweet, with a touch of herbs.

The word ‘Rapé’ comes from France and means grate or grated, which refers to the 1700s practice that originated in French society circles where people grated their tobaccos by hand to get the exact consistency they wanted.

Today a different production method is used. When the newly formed AB Svenska Tobaksmonopolet relaunched in 1919, Göteborg Rapé started to be ground, as with all other brands, but the company kept the name Rapé harking back to the origins of the snus.

When all the brands took on the round cans in the 1960s, the ones originating in the coastal town of Göteborg were given a blue labeling, to identify their links to the sea. Göteborg’s Rapé is as a traditional snus with a rich heritage. Available in White Portion, Mini White Portion and Loose

Gothenburg Rapé is one of the biggest brands in the Swedish snus market. The name comes from the French "Rape" which means "torn". In the 1700s, as it was considered very nicely on tobacco was torn, and the name of Gothenburg Rapé came to that very reason.

Reviews 2
Write Your Own Review
Customers who bought this product also bought: