Just as the name suggests, Grov snus Portion is a coarser snus. It is the obvious choice for those who want a little more feeling under the lip. With a robust and rounded, strong tobacco flavor. You can feel tones of wood and leather, but the flavor also carries some nuttiness and sweetness in a balanced combination. Grov snus has a long history. The snus became popular in the 19th century and is still manufactured today after a prescription that is more than 100 years old. Available both as loose snus and portion snus. The brand was first manufactured in Norrland, before Swedish Match took over production now in southern Sweden. 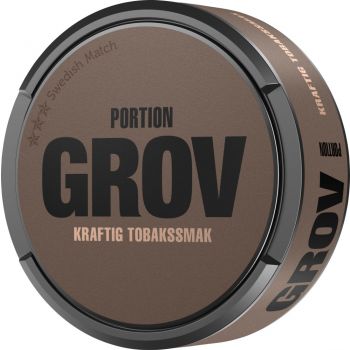 A pure tobacco flavor, together with a coarsely ground tobacco, make up the character of Grov snus. Already from an early stage, Grov snus was a blend of coarse and finely-ground tobaccos.

Wilhelm Hellgren began his career in an office at Aperlins tobacco factory in Stockholm. During his younger years, he soaked up every bit of knowledge a tobacco maker ought to possess, and started his own manufacturing in 1840. In 1844, Johan Bäckström of Umeå started as an office worker at tobacco manufacturer W:m Hellgren & C., and a quick five years later became partner and co-owner of the firm.

W:m Hellgren & Co enjoyed rapid success, and within ten years he was heading the country’s third-largest factory with its own retail stores in the centre of Stockholm and on Södermalm. In 1851, Wilhelm Hellgren set off for other pastures, leaving Johan Bäckström as sole owner of the firm he started. One of the snus brands made by W:m Hellgren & Co was Grovt snus, a popular snus up north. The Grov snus of today has its origin in this thiscoarsely-ground snus recipe.

Grov has been a trademark since 1872, when it was still sold in its original loose form. Grov Original Portion was launched in 1983, and was followed twenty years later by Grov White Portion. The latest addition to the family is Grov Stark Portion, launched 2013.

Information about the product - Grov snus
As the name suggests, Grovsnus Serving a coarse snuff. There is the obvious choice for those who want a little more sense under the lip. With a robust and rounded, strong tobacco taste. You can feel the tones of wood and leather, but the taste also carries a certain nuttiness and sweetness in a balanced combination.

Grovsnus has a long history. The snuff quickly became popular in the 1800s and produced today for a recipe that is over 100 years old.

Available in both loose and portion. The brand was first produced in the north, before the Swedish Match took over production that is now in southern Sweden.