Nick and Johnny Americana offers a strong portion of snus with cinnamon, cherry and wintergreen. The pouch quickly add to their taste thanks to their moist surface and fit. The can also has a new design with a large bow and a simpler shape. A snus for those who dare try something new. Nick and Johnny Americana Xtra Strong is another member of the strong Nick and Johnny family. Note The product was formerly Captain Yankee but both name, design and recipe / portions have been updated. 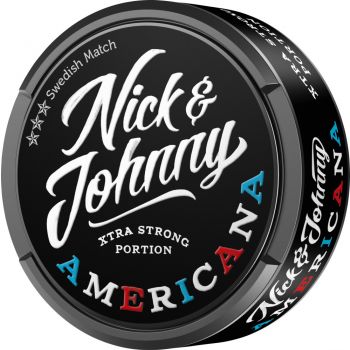 With Nick & Johnny we have challenged our own opinion about how a snus is supposed to be. With seven combinations of strength and different tastes, Nick & Johnny is primarily represented on the Norwegian market, but also in Sweden. Lemon, cinnamon and chili, cactus, cherry and mint are some of the included flavors.

Note The product was previously named Captain Yankee but both names, designs and recipes / portions have been updated.

Reviews 2
Write Your Own Review
Customers who bought this product also bought: