The Lab 02 Strong Portion is developed by a group at Swedish Match who worked very close to new snusers. The result was a portion that has newer taste nuances and a no-drip formula", that is, the portion is perceived to drain less." 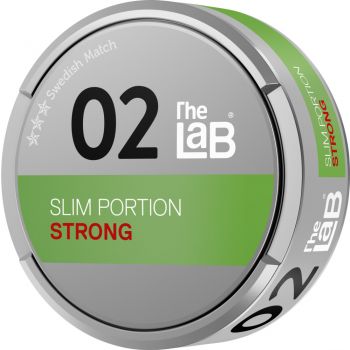 The close collaboration in the team also brought two innovations, the slimmer pouch and a non-drip release system. The slim portion pouch is less visible behind the lip. The non-drip releases more flavor, with less drip. The products have a neutral design with simple lines that clearly illustrate the contents. The LAB was launched in September 2009. The LAB Fresh was launched in August 2013, as a new concept with mild tobacco taste and a cooling function. A long, narrow pouch in Slim format, with a dry surface for less drip. During spring 2014, The LAB Fresh is relaunched, following successful product improvements. Buy The LAB 02 Original Strong Portion!