Thunder Wintergreen Portion, has a delicious snus flavor. Wintergreen is a berry plant growing in North America, and the name wintergreen comes from the fact that the plant is also green in winter. For those who tested Jenka (chewing gum) this snus has a similar taste. Thunder Wintergreen Portion is a snus from V2 Tobacco. V2 Tobacco is located in Silkeborg, Denmark, producing several types of snus: portion snus, strong portion, loose snus and nicotine-free snus. All snus from V2 Tobacco is pasteurized and has low levels of TSNA (tobacco-specific nitrosamines). 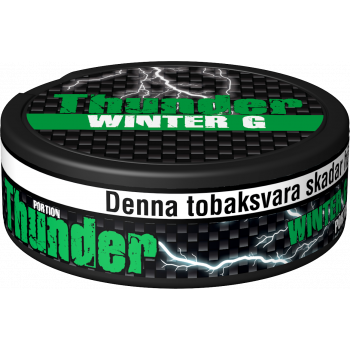 Thunder the snus with extra nicotine is one of Scandinavia's strongest varieties of snus in terms of nicotine content. It is twice as strong as traditional snus. Thunder is manufactured using a larger proportion of tobacco leaves, giving it higher nicotine content.

Thunder snus is for the discerning man requesting extra nicotine and a more robust and flavorful smokeless tobacco. It is available in the form of portion and loose snus and in several different flavors. Buy Thunder Wintergreen Portion online with Snus24 today!

"Our philosophy and our concept for the production based on our passion for snuff, for the excellent quality we can achieve by producing a small volume of smokeless tobacco. We produce high-quality snuff sold today in many länder.Vi believe that snus is a very enjoyable and sophisticated product, filled with many flavors and aromas of aromatic herbs and spices with natural freshness. It can be enjoyed in virtually all social situations. " - V2 Tobacco