Buy Swedish snus General Mini which has a full-bodied, spicy tobacco taste with pronounced notes of citrus from bergamot and hints of hay, green grass and stable. A smaller pouch with a moist snus for fast flavor release and full bodied character. 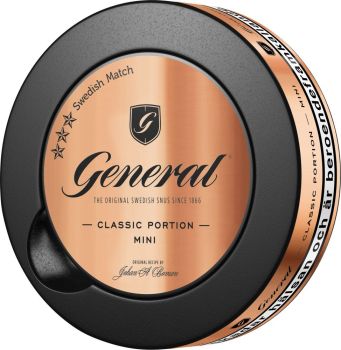 Information about the product - General Mini Snuff
General Mini Portion is not the 1800's, as its big brother General Portion. It is however still the same class, just in smaller portions. Mini snus can not be seen just as well under the lip and is more discreet. But with the same great taste! A full-bodied and spicy tobacco taste, where you will also find hints of the citrus-like spice bergamot and tea, dried grass and leather. The combination of spiciness and sourness makes snuff balanced.