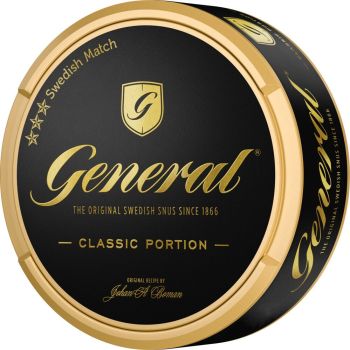 GENERAL - A 150-year-old snus HISTORY
The history of the General brand began back in 1866 with the snus producer Johan A Boman's search for what he called the perfect snuff. It took him all of four years of development before he was satisfied with his prescription. It was the beginning of a snuff history that continues to this day.

WITH SENSE OF QUALITY

Around 1850 started the contractor and the Freemason Boman tobacco industrialist Ferdinand Körner tobacco company Körner & Boman in Gothenburg. Körner accounted for capital and Boman for visions. Johan A Boman was known in Gothenburg for their attention to detail. Self he saw his developed sense of taste as something of a curse. During a dinner party, he reportedly complained to his friends about not being able to settle for anything but the highest quality. "I wish I could appreciate the next best quality. But I find simply no joy in it, "he reportedly said.

Johan A Boman had the same attitude to snuff. When he could not find a snuff that lived up to his standard, he took matters into his own hands. He traveled across the world to try to find the best tobacco leaves and began to experiment with different combinations. He looked even more closely at the manufacturing process.

After Bomans instructions used only the finest parts of the tobacco plant, the stems were avoided and tobacco dried in direct sunlight. He discovered that the younger leaves offered a more powerful effect. Tobacco was ground by hand and the stored long for it to develop a smoother taste.

For four years, going development work. Johan A Boman tested to and combined different varieties. In 1866, he had finally found a recipe that he was satisfied with - a mixture of twenty-two kinds of tobacco, with a drop of bergamot oil filled. Even today, only a few people who know the Bomans basic recipe.

During its 150-year history, the General developed, but Bomans basic recipe lives on in the new products. 1985 was introduced in General snus. 2003 saw the launch of General White Portion snus in white pouches, which does not run in the same way as traditional portion pouches. In 2005 introduced General Onyx - a new option in General but with black pouches.

The development still continues with Johan A Boman solid heritage as a base, and today there are a variety of general-products in both the Swedish and international market.