Buy General white mini snus which has a full-bodied, spicy tobacco taste with pronounced notes of citrus from bergamot and hints of hay, green grass and stable. A smaller pouch with dry surface for less drip. The pouch contains a moist snus which provides a prolonged flavor release. 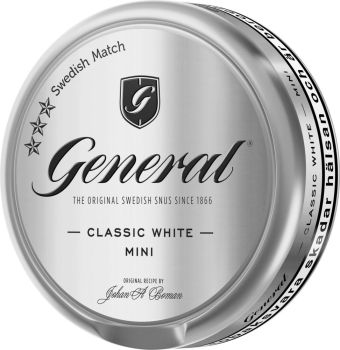 informatiom If the product - General White Mini Snuff
Although General Mini White Portion not dates back to the 1800s as its big brother General Loose, keeping the same high standard. General Mini White is not visible as well under the lip, then the portion is smaller. As with other white portions will taste gradually and more slowly than in a standard serving.

The name-General has, in contrast to what one might think, nothing to do with the military rank. General comes from the word "general" or "universal" and refers to a "General snus" - a general snus. Regardless of what one thinks about General snus, this variety has set the standard for what is snuff, both in Sweden and the rest of the world.